What is COB LED Strip

How To Install LED Strip Lights 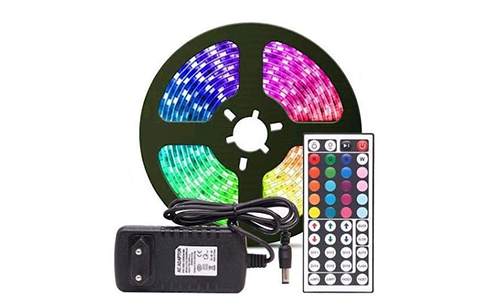 LED lights are loved by everyone because they have long lifespans and are more efficient than old-school bulbs. Furthermore, LED lights are safer and require less maintenance than other lights. However, not all LED lights are created alike.

There are two types of LED downlights: chip on board (COB) LEDs and surface mount diode (SMD) LEDs. Both of these downlight solutions produce high-quality light and you can count on both of them to endure a long time and to perform admirably. They do, however, have certain distinct advantages over each other.

Here’s a look at the difference between SMD and COB LEDs, and which one could be better for your house or company.

What are COB LED strips?

The COB LED strips feature a mounted LED chip that requires additional cooling capacity because all of the light’s LEDs are concentrated in a single region. For this reason, there will be a large heat sink in the area to dissipate the heat. Because of the additional cost of a heat sink, the COB LED may cost a little more than an SMD LED.

Typically, COB chips feature 9 or more diodes. Regardless of the number of diodes, COB chips have only one circuit and two connections. COB LED lights have a panel-like look due to this simple circuit construction. COB LED lights, however, unlike SMD LED lights, cannot be used to generate color-changing lights. This is due to the fact that there are only two contacts and one circuit.

COB lights are often used in single-color applications but do not find use in more diverse technology.

What are SMD LED lights?

An SMD LED strip is used to produce 50-100 lumens per watt, which means that you will receive more light using less wattage. Even though a COD LED strip is more efficient, SMD LED lights have better efficiency in terms of brightness.

Because an SMD LED produces a wider light beam, it does not require as large a heat sink as a COB LED. As a result, SMD LEDs could be less expensive. These lights also have frosted reflectors on them, which allow for equal light distribution and conceal the chip array inside the bulbs.

SMD LED chips are available in a variety of sizes. Chips with intricate designs, such as the SMD 5050 LED strip, which is 5mm wide, can be accommodated by SMD LED. The SMD 2835 LED strip, on the other hand, has a width of 2.8mm.

SMD chips are compact and are practically identical to the flat, square computer chip architecture. The number of connections and diodes on SMD LED chips is one of their distinguishing qualities when you look at COB vs SMD lights. SMD chips have more than two connections and up to 3 diodes with an individual circuit for each diode.

The configuration of SMD chips makes them more versatile while comparing COB LED vs SMD LED. The SMD chip includes three colors of diodes including red, green, and blue which can create virtually any color by adjusting the output level.

Why should you choose the COB LED?

COB LED lights, as a general rule, are higher-quality light sources. This is due to the fact that they use reflectors to provide focused and controlled light. They also lack the frosted lenses that come standard with SMD LED lights. As a result, you should expect brighter, clearer lighting. COB LED lights are very useful in high-ceiling areas because of this.

COB LEDs are higher-end LED lights that have a more architectural look; if you plan on living with your LED downlights for a long time, a COB LED strip is the way to go. If you’re placing LED strips in an investment property, SMD lights will suffice.

Why should you choose SMD LED lights?

As previously mentioned, SMD LED lights are a great alternative if you want your light to flood a broad area. You may put them in bathrooms, kitchens, or bedrooms, for bright light. When you look at LED COB vs SMD, the SMD lights have more glare and offer a greater impact in dark areas.

Difference between COB and SMD lights

An SMD is a point light that is produced by combining multiple point power supplies. There are discrete SMD devices that exist for point light and glare. On the other hand, a surface light is referred to as a COB. The illumination is more uniform, there is no halo, and the angle beam of COB is easy to adjust. There is no spotlight or glare when in COB lights as compared to SMD.

SMD: The SMD LED chip is made of conductive and insulating glue, which is applied to the lamp bead holder’s pad, and then welded with the same conductivity as the COB package. After passing the performance test, it is encased in epoxy resin and divided, chopped, and taped before being sent to the screen factory.

COB: With conductive glue and insulating glue, the COB LED chip is directly attached to the pad of the lamp bead lamp location of the PCB board, and then the LED chip’s conduction performance is soldered.

SMD lamp beads: Labor and production costs contribute to about 15% of the material cost of typical SMD lamp beads.

Based on the differences of COB vs SMD LED for growing, the practical application of COB and SMD lights depends on the luminosity and color temperature options that it offers. SMD 2835 led strip is used to illuminate dark corners with bright light. It is generally used in architectural structures to highlight the precise details of architecture.

COB LED lights are durable in high temperatures for a long time which gives it a good prospect in street lighting systems and industrial lighting.

Which Led is Better and Brighter?

Determining which LED light is better between COB and SMD, will require you to consider the three determining factors that are:

In general, when working with LED lights, you should expect to save a lot of energy. This is why contrary to filament bulbs, they are gaining popularity and becoming the most preferred light source.

With this in mind, you can rest assured that both SMD and COB LED will be extremely energy efficient. It’s important to understand that amount of energy used will vary based on the lumens used. The greater the lumens, the more energy-efficient the device is.

Led lights are more cost-effective than other light sources. They are designed to last longer and consume less energy than others. You’ll need to put down an initial investment that may be a little larger than usual, but it will be well worth it. In terms of production costs, SMD LEDs will be more expensive than COB LEDs.

The lumens produced by the chips involved have a major impact on the brightness. In general, as compared to other light sources, LED lights emit a brighter light. This is due to the fact that they have a higher lumen.

When it comes to SMD LED, a lumen per watt measurement of 50 to 100 is used. This implies that even with a high lumen level, less energy is used. COB, on the other hand, operates with a larger lumen than SMD. The lowest criterion used is 80 lumens per watt. This improves the brightness and quality of COB-powered lights.

When it comes to performance and energy efficiency, there’s no denying that LED lights outperform alternative light sources. This is why it’s critical to embrace them if you want to get the most out of your options, and also select the best manufacturer.

If you’ve been trying to figure out what COB and SMD are, maybe this article has answered all of your questions. These options are both good investments and work in the same way to keep the lights running efficiently.